skip to main | skip to sidebar

Wolves no longer exist in Ireland, but this wasn’t always the case. Wolves once overran the island, causing all sorts of mischief. The Irish refer to the werewolf as faoladh or conriocht. The Irish legends aren’t based off the German myths. The werewolves weren’t man-eating creatures, but rather protectors. The wolves protect children, guard wounded men and have also guided a lost person to safety. Even today a wolf talisman is still believed to ward off evil.

In 1185, Giraldus Cambrensis wrote down the first werewolf tale, believing the story to be true. Serious, no lie, he believed every word. Giraldus spoke to Bishop of Ossory, giving his views about the incident. The Bishop then sends the information to Pope Urban III.

As the story goes...A priest was traveling from Ulter to Meath on an i 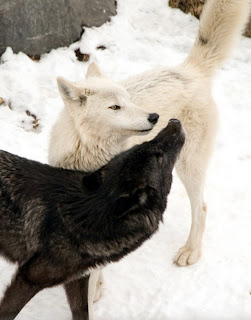 mportant mission with his assistant. The two stopped for the night in the woods where they come across a huge wolf. They’re frightened and would have run in fear, but the wolf speaks to them in a human voice. The wolf proceeds to tell them how St. Natalia, who was known to be ill-tempered, cursed the Ossorian people for sins they’d committed. Two Ossorians, a man and a woman would live in the shape of wolves for seven years. After they completed the cycle, they would return home and another couple would take their place. This wolf told the priest his wife was dying and wished the priest to give her the last rites. The priest does so and the wife dies peacefully. The wolf then tells the priest several prophecies about the English in Ireland. The priest promises to meet the wolf at a later date, but he never sees the wolf again.

Another legend tells how the Ossory people can change into wolves whenever they wanted. When an Ossorian became a wolf he would leave his body at home as if he were dead. He would leave strict orders with at trusted friend not to move the body. If someone moved the body and the wolf couldn’t find it, he would remain a wolf for the rest of his life. In his wolf form, he lost all human aspects and would attack sheep and cattle, as any other wolf would do. If surprised or attacked while eating, the wolf would run home to resume his human form.

In Irish folklore the werewolf motif is found throughout history. There are tales about wolf-men tribes that lived in County Tipperary. The ancient kings of Ireland would ask for their help when threatened by war. There are other tales about half-men, half-wolves living in the mountain regions.

In my story, Moon Shifter, the werewolves are the Mac Tíre, a clan who escaped being hunted down and killed under Cromwell’s rule.

I hope you enjoyed the tidbit about Werewolves in Ireland. If you’d like to learn more about my books, please visit me at my website: KMN Books. Of course, I’m known to frequent Facebook and Myspace and Twitter.

I’ll leave you with a sneak peek of Moon Shifter. May you have a safe and Happy Halloween!

Posted by Karen Michelle Nutt at 6:39 AM